On the 18 August at 11 a.m. at the Durban University of Technology’s City Campus Room 149 the Mahatma Gandhi Media Lecture will be delivered. The guest speaker this year is a renowned Prof. Aashish Kumar from the Hofstra University USA, where he is teaching undergraduate students in single camera documentary production. 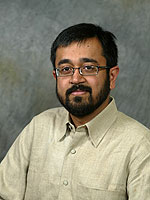 He has various degrees from the Universities of Brooklyn College , Cuny, Indiana State University Terre Haute and Delhi University.

He has made many documentaries ranging from community struggles to globalisation and migration.

He has presented various papers at Institutions of higher learning as well as at the UN. He is very grounded in the community and deals with issues of effects of globalisation on third world countries, issues of race and ethnicity and on mobilisation of communities.

He has many awards to his credit and holds leading positions in many important Committees.

His lecture will explore the resonance between Gandhian ideals of self-determination and the post-70s movement for equitable communication rights.  This period marks a shift in global communication discourse whereby grassroots activists, recognizing the importance of mediated communication in the shaping of the public sphere, began advocating for community ownership or control of electronic media.  The emphasis on citizen participation In creating and disseminating community stories reflects a core Gandhian principle that true emancipation begins with emancipating the self.  In tracing the evolution of such a rights–based discourse in electronic media, the following case studies will be used: National Film Board of Canada’s “Challenge for Change” program, the Southern Indian Deccan Development Society’s “Community Media Trust,” and “Working the City: Experiences of Migrant Women in Johannesburg,” a collaborative project involving the Market Photo Workshop, the Forced Migration Studies Programme at the University of the Witwatersrand and the Sisonke Sex Worker Movement.