Ashok Ramsarup Gets an Award

Ashok Ramsarup Gets an Award

The AIDS Society of India, People’s Health Organisation and CNS an Indian News agency in collaboration with the Gandhi Development Trust gave a recognition award to Ashok Ramsarup for his dedicated service to media work incorporating local and overseas news.

Present at the ceremony were Dr Ishwar Gilada, who was involved with first HIV diagnosis in India and has spearheaded the response since then (and is national President of AIDS Society of India) and Shobha Shukla who is the Managing Editor at CNS and co-moderated health webinars for media with Ashok Ramsarup of SABC for a long time and Bobby Ramakant, who works with Dr Sandeep Pandey a Gandhian activist who has been involved with National Alliance of People’s Movements (NAPM) and now rebuilding Socialist Party (India) as its National Vice President.

Ashok covered South Asian news of people’s movements and struggles consistently since 2000 onwards in our knowledge.

Ashok has been dealing with serious health issues since March 2016 and retired from SABC on 31 May 2016. 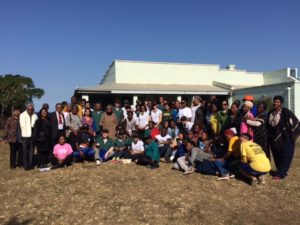 This ceremony took place at the Phoenix Settlement on Mandela Day.