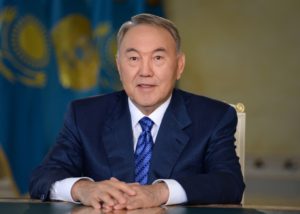 Issued by the government of Kazakhstan

Manifesto “Peace. XXI Century” by Nursultan Nazarbayev has gained the status of an official document of the General Assembly and the UN Security Council in the IV Nuclear Security Summit, held in the period of March 31 – April 1, 2016 in Washington, DC.

According to the qualitatively new paradigm published under the authorship of the President of Kazakhstan the world community must take comprehensive action towards the fateful questions of war and peace.

First,  there must be gradual progress to a world free of nuclear and other weapons of mass destruction.

Secondly, we must build on and expand existing geographical initiatives to gradually eliminate war as a way of life.

Thirdly, it is necessary to eliminate such relics of the Cold War as military blocs, which threaten global security and impede broader international cooperation.

Fourthly it is important to adapt the international disarmament process to the new historic conditions.

President Nazarbayev said “In the 21st century, we all need peace. This is a key mission of our time.”