People around the world observed Mahatma Gandhi’s 147th birth anniversary declared Day of Nonviolence since 2007, in many different ways. Let’s take a look at what they did: 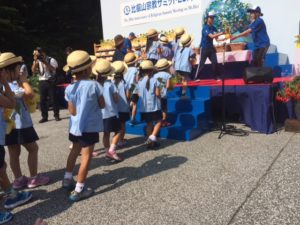 School children carrying cranes made by them to fill up the globe on display on the stage.

A campaign was launched by the Hibakushas (literal meaning “explosion-affected people” and is used to refer to people who were exposed to radiation from the victims of the nuclear bomb attacks on Hiroshima and Nagasaki) calling for a nuclear free world, on 6 August 2016, the 71st anniversary of the attack.

“I regard the employment of the atom bomb for the wholesale destruction of men, women and children as the most diabolical use of science.” Mahatma Gandhi

On 6 August 1945, the world was shattered. For the first time the world witnessed the detonation of the terrible atomic bomb over the Japanese city of Hiroshima, wiping out almost the entire city and killing 80,000 people with thousands left to suffer radiation exposure and a torturous deaths. The human suffering and the utter annihilation of large tracts of land still haunts the survivors of this great calamity.

This campaign culminated in Berlin on 2 October.

A three dimensional street painting of a nuclear missile being fired from the ground next to the German Parliament was unveiled on 2 October. “The street painting…is a graphic reminder that there are nearly 15,000 nuclear weapons in the world, 1500 of them able to be launched within minutes,” says Holger Güssefeld from the World Future Council, sponsors of the art installation.

In conjunction with the exhibition, an international conference ‘Disarm! For a Climate of Peace – Creating an Action Agenda’ was also organized in Berlin bringing together over 1000 people. “The Conference focused on positive and effective actions that can be taken by civil society. A range of ideas were discussed and an International Peace Building Action Agenda adopted. Attempts were made to bring together theoretical considerations and real transformation strategies.” said Colin Archer, The Chief Executive Officer of the International Peace Bureau, and Secretary-General and Coordinator of the Global Campaign on Military Spending.

Be the change- exploring the Mahatma in you

Gambhir Watts, President of the International Centre of Nonviolence Australia launched their third Annual Nonviolence Month. Among a range of activities engaging schools, Universities and the public they launched an exhibition entitled ‘Borderless Gandhi’ at which Vibhor Sogani’s artworks are being displayed. Sogani said “Mahatma Gandhi asked us to be the change you wish to see. He basically said ‘You guys have to do it, you have to look for the Mahatma within’. So in my works you see yourself intermingled with the Mahatma. That’s why I called the series “Mahatma in me”. It’s exactly that.”

Lene Makwana, and her husband Nilesh are educators who through the month will be conducting educational programmes to encourage youth to look within and find the Mahatma in themselves.

Cultural festival and day to come together as peace organisations

Prof. Rama Singh at the Mc Master University in Hamilton, Ontario, has been bringing various peace activists from the community and academia together to observe the birth anniversary of Mahatma Gandhi. The purpose has been to promote peace and to afford an opportunity for collaboration and exposure for all the various organizations working on peace issues. The festival is comprised of various cultural activities ranging from poetry, drama, song, dance, painting and handicrafts and culminating in a lecture.

“We had our 24th Annual Gandhi Peace Festival here in Hamilton. As we celebrate Gandhi’s birthday, let us make it a day of self reflection, prayer, and service” said Prof. Singh.

A day to reflect on social cohesion and community building

On Saturday 1st October, the Gandhi Development Trust observed the Day of Nonviolence at the Phoenix Settlement in Inanda

A discussion forum on social cohesion was organized at the Settlement where Gandhi lived from 1904 until he left South Africa in 1914. This forum brought together a number of community organizations as well as individuals from the neighbouring community. Deputy Mayor Cllr Fawzia Peer opened the function, MEC Ravi Pillay and the Acting Consul General of India, Mr. Rawat, addressed an audience of about 90 people.

Cllr. Fawzia Peer said, “According to the General Assembly resolution establishing the International Day of Nonviolence, this is an occasion to “disseminate the message of non-violence, through education and public awareness”. The resolution reaffirms “the universal relevance of the principle of non-violence” and the desire “to secure a culture of peace, tolerance, understanding and non-violence”.

“Gandhi, who helped lead India to independence and contributed to the freedom struggle in South Africa, has been the inspiration for non-violent movements for civil rights and social change across the world. Throughout his life, Gandhi remained committed to his belief in non-violence even under oppressive conditions and in the face of seemingly insurmountable challenges.

Kwame Nkrumah who led Ghana to independence and played a key role in the formation of the Organisation of African Unity, was a disciple of Gandhi’s non-violent strategy of Satyagraha which he coined as “Positive Action”.

Nelson Mandela, launched a campaign of Gandhi-inspired acts of civil resistance and nob-violent non-cooperation against the Apartheid government until the oppressors could no longer be confronted by passive aggression alone. Nelson Mandela described Gandhi as “the archetypical anti-colonial revolutionary”.

Martin Luther King Junior who won the struggle for civil rights and voting rights for African Americans in America was also tremendously influenced by the non-violence philosophy of Gandhi. King had this to say, and I quote, “As I read his works I became fascinated by his campaigns of non-violent resistance. The whole Gandhian concept of Satyagraha was profoundly significant to me. As I delved deeper into the philosophy of Gandhi, my skepticism concerning the power of love gradually diminished, and I came to see for the first time its potency in the area of social reform.”

The responses were well thought through and articulated. They emphasized the need for better understanding, respect, equality, non-judgmental attitudes, good communication mechanisms, working together in a nondiscriminatory environment and building a critical mass that can respond to crises.

They also spoke about sports as a uniting factor but stressed that sports needed to have more diverse participants. They recognized the critical role of religious organizations. But it was pointed out that we also need to answer the important question of how to make civil society organizations aware of their role in social cohesion? Crime was seen as a major problem preventing social cohesion. There was consensus that strong civil society organizations needed to be built and a good community leadership developed.

Gandhi Centres in India and Indian embassies and consular offices in all the countries of the world.

Focused on prayers and awareness of the role of Mahatma Gandhi

On Sunday October 2, a prayer service was held at the Durban Station where Gandhiji embarked on the train on his journey to Pretoria, on 6 June 1983. A journey which had the effect of turning his life around, when he was asked to move from a first class to a third class compartment and he refused. He was forced off the train in Pietermaritzbug where he spent the night contemplating whether he should return to India, stay and accept the situation or whether he should stay and fight the oppression. This decision was the turning point in his otherwise mundane life.

Later that day a film was shown at the Consulate offices which depicted the opening of the Bharatiya Pravisi Kendra in India with an interactive modern exhibition on Gandhi. The exhibition presented the highlights in Gandhiji’s life

The Mahatma Gandhi Memorial Committee organized their annual Peace Walk from the Freedom Square to the Pietermaritzburg Station. Apart from the inspirational walk there was a programme of interfaith prayers, speeches and cultural items.

An event celebrating the birthday was held at Diepsloot in Johannesburg, a poverty stricken settl

ement. Statues of Gandhiji were sculpted by the students of the school specially for the occasion. A cake with the spinning wheel was made and the celebratory function culminated with a trip to the theatre and an audience with the actors.