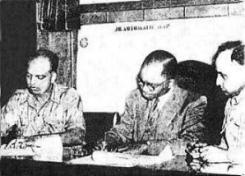 Recently there have been many attempts at looking into the levels of racism in South Africa. While we have had a number of forums where these questions have been discussed and views frankly and openly expressed to bring about some changes in our thinking and behaviour the words of the three doctors pact are of significance.

“This Joint Meeting declares its sincerest conviction that for the future progress, goodwill, good race relations, and for the building of a united, greater and free South Africa, full franchise rights must be extended to all sections of the South African people, and to this end this Joint Meeting pledges the fullest cooperation between the African and Indian peoples and appeals to all democratic and freedom-loving citizens of South Africa to support fully and cooperate in this struggle.”

The doctors identified six points on which to collaborate: universal franchise, economic emancipation, land rights, workers rights to organise freely, free and compulsory education, freedom of movement and the removal of all forms of discrimination. The pact also identifies united work as a means to building social cohesion.

But 60 years hence while certainly strides have been made in providing free compulsory education, the quality and content of our education has not changed to reflect the new ethos.

Looking back among some mistakes we made were, effecting major changes in the curriculum before our educators were properly trained to apply the changes. We closed down training colleges rather than transforming them into new models for training batches of new educators. We offered packages and saw the exodus of good educators from the system.

The issues of our economy and land rights are also major issues which if not adequately addressed can lead to major problems in the future. Strife arises from economic inequalities. While certainly there are many programmes and policies of our government which can result in many more people benefiting, the rampant corruption, mismanagement, laissez-faire attitudes and incompetence resulting from lack of proper training and supervision has resulted in the suffering of the most vulnerable section of our population.

Another important issue emerging from the Pact is the recognition of our common oppression and our common destiny. Transforming a racially divided country into a united nation requires a strong commitment to unity which can not only help to precipitate our liberation from the economic trap but also help towards the development of our country. Some of the important key words are “cooperation, active work and commitment ”. Continued recriminations and hostilities on the basis of political beliefs are not going to help to bring about change.