On June 13, 1946, 70 years ago, a group of Indian people pitched their tents and occupied a piece of land in the middle of an area designated for “white” settlement and from which “non-whites” were prohibited. A resistance Park has been built on this historic site.

After the 1913 march against the pass laws for Indians, the non-recognition of Indian marriages and the 3 pound tax, led by Mahatma Gandhi, the passive resistance of 1946-48 was a landmark in the history of the South African liberation struggle.

It paved the way for the Defiance campaigns of 1952 and for the on going non-violent struggle waged by the masses of South Africans and the overwhelming support received from people of other countries. This was a people’s mass action against injustice and violation of human rights.

Within these mass action were the seeds of unity of the oppressed peoples of South Africa and abroad. From attracting a few hundred people the Congress movement rose to mobilise thousands within their fold. A strong unity was forged and paved the way for the growth and ultimate freedom of South Africa.

Early in 1946, the Smuts Government announced its decision to introduce the Asiatic Land Tenure and Indian Representation Bill, severely restricting the rights of Indians to own or occupy land. The bill also provided for the election by Indians – on a separate communal voters’ role, under qualified franchise – three Europeans to the House of Assembly and two Europeans to the Senate, as well as two members to the Natal Provincial Council. 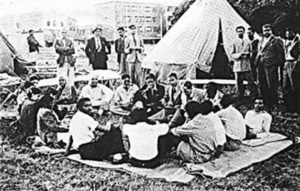 The entire Indian community opposed this measure. The conference of the South African Indian Congress (SAIC), still under the control of the “moderates”, adopted a resolution accusing the government of appeasing “extreme white reactionaries”. It resolved “to mobilise all the resources of the Indian people” to oppose the proposed legislation which it described as “an insult to the national honour and dignity of the Indian nation”. It also decided to send delegations to India, Britain and the United States. Public opinion in India was outraged at the decision of the South African government to proceed with the legislation despite repeated representations by the Indian government. In March 1946, when the SAIC delegation arrived in India, the Viceroy’s Executive Council announced its decision to terminate the trade agreement with South Africa. A first step towards ultimate boycott of South Africa and its isolation from the world.

As the South African government proceeded with the legislation – described by Dr. G.M. Naicker as the “Ghetto Bill” – the Natal and the Transvaal Indian Congresses set up.

Passive Resistance Councils (PRCs) – under the leadership of Dr. G.M. Naicker, President of NIC, and Dr. Yusuf Dadoo, President of TIC – to organise resistance. The councils agreed that immediately after the Ghetto Bill became law, resisters from all over the country would defy it by occupying municipal land at the corner of Gale Street and Umbilo Road in Durban.

The Ghetto Act came into force on 2 June. Passive resistance began on 13 June which was observed as “Resistance Day” with a complete mass stay-away (hartal) by Indians all over the country. A mass meeting of over 15,000 people in Durban was followed by a march to the Gale Street “Resistance Plot” where, under the leadership of Dr. Naicker and M. D. Naidoo, the first batch of seventeen passive resisters, including seven women, pitched tents in defiance of the Ghetto Act.

The government took no action for several days and the police stood by while white hooligans attacked the camp nightly from 16 June, pulled down the tents and assaulted the resisters, including women, with ever-increasing savagery. On 21 June, Krishensamy Pillai, a plainclothes policeman, was attacked in the vicinity of the resistance camp, beaten unconscious and thrown in a gutter: he died of the wounds a few days later. On 23 June, five resisters were beaten unconscious and thrown in the gutter; Miss Zainab Asvat and Mrs. Rabia Docrat were injured, and J. Joshi, leader of a batch of resisters, fell unconscious. None of the hooligans was ever charged.

The resisters were undeterred and remained non-violent. “Hooligans or no hooligans, carry on we must, and carry on we shall,” said Miss Asvat who had left her medical studies to join the resistance. Mrs. Docrat, who received serious internal injuries, said in a statement: “The brutal assault on myself and my fellow resisters are signs of the weakness of our oppressors. We may be harmed and physically maimed or even die, but the spirit of our people will not die because of these brutal and cowardly attacks. In the face of all WE SHALL RESIST.” These organised acts of terrorism against peaceful resisters, condoned by the authorities, greatly increased support for resistance. Thousands of Indians visited the camp every night to show their support and admiration for the resisters and hundreds enrolled as resisters all over South Africa.

The cowardly racist violence moved the Reverend Michael Scott and Benny Sischie, a student at the Witwatersrand University, to join the resisters. Michael Scott recounted how he stood in a group of resisters which was attacked. He was pushed and insulted by the bullies, while Miss Asvat, who was with him, was bleeding. He recalled that she said to him, “It’s not their fault, they don’t know what they are doing”. He commented that her religion had taught her more than the attackers had found in the story of the Crucifixion. Violence stopped only on 24 June when the Smuts government took action after wide protests, including condemnation by Mahatma Gandhi. It was only on 27 June that the first group of resisters, including Dr. Dadoo and Dr. Naicker, were sent to prison, this time under the Riotous Assemblies Act.

Doctors and lawyers, workers and traders, farmers and housewives, students and teachers joined the resistance and went to prison. The resisters included many priests and theologians; Mrs. “Cissy” Gool, a City Councillor of Cape Town; the 79-year-old Ebrahim M. Kotwal; and several schoolchildren, some of whom were sentenced to flogging. They numbered nearly two thousand by June 1948 when the resistance was suspended.

The Ghetto Act could not be enforced. Not a single Indian agreed to join the Land Tenure Advisory Board. The communal representation offered under the Act was still-born. A strong unity was forged among all the races against apartheid.